I am an Argentinean filmmaker; I have made films since 1963, all of them about the political and social situation in Latin America. I try to demonstrate that there is only one way to bring profound structural changes to our continent: the socialist revolution.

The Common House
Unit 5E (press the buzzer)
5 Pundersons Gardens
Bethnal Green E2 9QG —
“Written, directed and produced by Ernesto Ardito and Virna Molina. This is a documentary film about the life and work of Raymundo Gleyzer, Argentine filmmaker, kidnapped and murdered by that country’s military dictatorship in 1976. Through Raymundo’s life, we follow the story of Latin American revolutionary cinema and the liberation struggles of the 60’s and 70’s. Raymundo was one of the major architects of the militant cinema, yet after his “ disappearance ”, he fell into oblivion. It is essential that the new generation rediscovers his life and works which are a source of inspiration today more than ever. This documentary will bring back what the CIA and the Latin American dictatorships couldn’t destroy: the memory, the ideals and the courage to tell the truth”. .
.

UnCine invite you to enjoy and unpick with us militant workers cinema from 1970’s Argentinian dictatorship. After the film, there will be an autodidactic presentation (with clips from Argentinian struggle and the later representation of that struggle) on some of the themes we find interesting in relation to the film ‘Raymundo’:
.
What does it mean to invest in cinema as a medium of consciousness raising? What does it mean to be part of the guerrilla struggle and make films? What’s the deal with the People’s Revolutionary Army and the 1969 uprising Cordabazo? What does it mean to die for cinema, for the revolution? Why has the participatory and militant intention of Third Cinema been mostly overlooked? How to review Full Unemployment Cinema and other political film projects through the lens of Raymundo, his/their films, the notions of militant cinema and workers’ film screenings? Why didn’t we just show his epic workers struggle feature film ‘The Traitors’ instead?

INTERVIEW WITH RAYMUNDO GLEYZER, 1973 ‘Many of them made films that we can call, in general Latin-American Cinema. From this experience, individually or in a group, nothing positive came out, and I include myself.  This is because the fundamental problem, when we make a film, is the final spectator of the product.  Everybody has thought about this problem; how to reach the base, the ordinary people, not only in theory, but also in the practice; to make films for the people, and the specific method to do it. We could talk about theory forever, but the problem is how to reach a real person, the working class, the person getting sick in the factories, they deserve at least our support.  From our own limits as middle class intellectuals, we have to contribute to their knowledge and send a clear message.  We realized that we had to make contact with the base, with the people struggling every day in the streets.  We did not have that contact. In 1969, we saw the working class, on its own, subverting everyone; the military, the bureaucracy, the unions, and maybe we, if we did not changed our paternalistic attitude. Either we do not understand the working class, or we speak for its name without anybody asking us.  It is a strategic mistake to separate ourselves from the people’s struggle.  It is worst yet for the intellectual that wants to contribute to the revolution. I believe this is why the incorporation of a political organization is crucial, an organization with a concrete plan to achieve power.  That is the revolutionary filmmaker’s mission; if not, it is just talking.  If not, we are just running our mouth. I don’t know if I am clear.  At Cine de la Base, we spent several months trying to solve technical problems, we did not take care of anything else: just where to develop, where to edit, who was going to do this or that.  Once these technical problems solved, we realized that our work as Cine de la Base would not be completed until we joined a specific political group, with a real plan to achieve power in Argentina.  If not, we are not political filmmakers; we are dilettantes, separated from the people’s national project. What do we do at Cine de la Base, besides making and distributing the film The Traitors? We formed three divisions. The first two produce films and the third one is dedicated to the graphic materials.  When one group produces, the other distributes, and vice versa.  We think that to have our own theatres is very important, so, we are building small theaters, because the film is only finished with the spectator.  If the film is clear and revolutionary in its ideology, we have to reach the people; we have to risk bringing them our work, just as we risked our lives filming it underground. The cinema is an instrument of the bourgeoisie; it was created to serve this purpose. To watch a movie, we need a theater, a projector, etc.   This condition makes it impossible to show a film in a factory, for the working class.  We have not developed the means to use film as a working class tool.  This is why we construct theaters, with any material available in the neighborhoods: wood, metal, etc.  We already have a cinema for 200 people, and the name is “Cine de la Base”.  We plan to build 50 more, and this is crucial to have our own distribution channel.’ 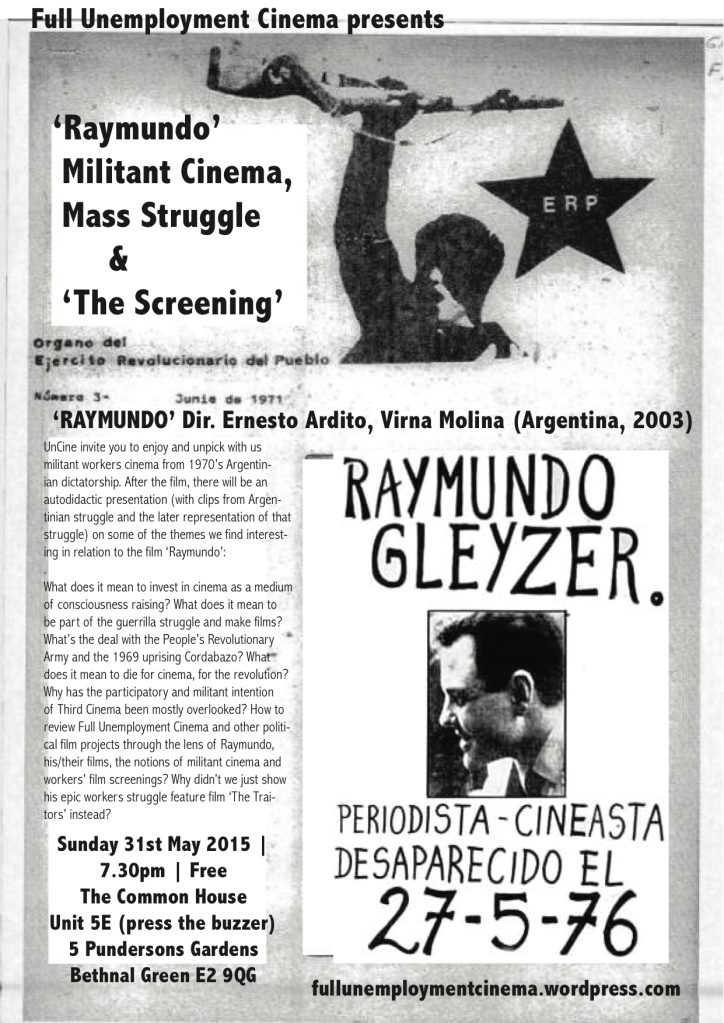 Juanita Sapire, Raymundo’s companera, remembers their life and work at the unveiling of a pavement plaque on the street outside the Film Industry Union building in Buenos Aires where Raymundo was kidnapped and disappeared on 27th May 1976.
This screening happens almost 39 years later to that day.